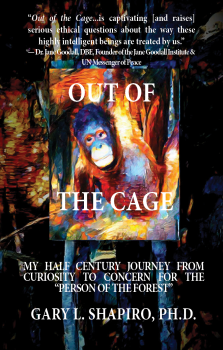 Preorder: Out of the Cage

“Out of the Cage describes Shapiro’s experiences with orangutans learning to live in the wild. The stories are captivating, and at the same time raise serious ethical questions about the way these highly intelligent beings are treated by us.”

A recently divorced graduate student is offered an opportunity of a lifetime. Asked to teach an orangutan sign language to solve a murder, he finds himself in an exotic land to discover a world of ex-captive red-haired great apes of Borneo who are learning to return to the wild.

Out of the Cage recounts Shapiro's studies and adventures from field notes and memory to demonstrate the many otherwise human interactions he has had with the unique orangutan personalities of Borneo and Sumatra, the highs and lows of their close and collegial relationships. Orangutan personhood, great ape rights, and the many moral conundrums that the scientific community has largely ignored weigh heavy on Shapiro's mind and heart as he reflects upon his experiences with those noble persons.

Indeed, the incredible journey of Sandra, an orangutan who was the first legally declared non-human person in a court of law, is chronicled, and the very real and simple actions that anyone can take to help save our compassionate cousins, the critically endangered orangutans, are revealed.

Out of the Cage describes Shapiro’s experiences with orangutans learning to live in the wild. The stories are captivating, and at the same time raise serious ethical questions about the way these highly intelligent beings are treated by us.

Gregory F. Tague, author of An Ape Ethic and the Question of Personhood

I’ve read environmental science books from David Attenborough to E.O. Wilson and everything in between. Dr. Gary L. Shapiro’s book Out of the Cage ranks among one of the best conservation books I’ve read. Dr. Shapiro’s book is a vital statement urgently needed as the world finally recognizes the environmental importance of rainforest flora and fauna in preserving climate health for the earth’s biosphere.

First, there are engaging and at times humorous narratives about Gary’s personal encounters with semi-wild orangutans. The book is filled with a colorful cast of human and nonhuman personalities. At the center of this tale is the special orangutan, Princess, whom Gary adopted as his first child, raised by hand at Camp Leakey, and taught (among others) sign language. In this way, Gary was able to communicate with semi-wild orangutans his and their thoughts, feelings, needs, and desires. Other orangutan characters include the amorous Rinnie and the mischievous Sugito. Later in the book, Gary recounts how his expertise helped release Sandra, an adult orangutan, from depressing conditions in a zoo in Argentina to the Center for Great Apes in Florida.

Second, the text charts an important historical record from the 1970s to the present as biodiversity of the Indonesian rainforests is depleted. We are at the tipping point dealing with climate change, and as Gary indicates, rainforests sequester carbon and act as lungs for the entire planet. To this day, I’m not sure anyone other than Dr. Shapiro has taught sign language to free-ranging juvenile and adult orangutans in their natural forest habitat. Remarkably, Gary carried on his work for years and tells the story in his compelling narrative. Gary’s adventure spans about fifty years and not only includes his first trip to the wilds of Borneo in the 1970s but also his continuing, passionate dedication to orangutans and the biodiversity they share and help cultivate in the rainforest.

Third, Gary is able to demonstrate how people can make a difference in alleviating the environmental catastrophe we’ve permitted to occur on our watch. People like Gary are the unsung heroes who labor in the shadows on critical conservation efforts that can have meaningful impacts for all earth’s life forms. After working closely with the legendary primatologist Biruté Galdikas, Gary struck out on his own to establish his organization The Orang Utan Republik Foundation solidifying his own legendary status. With inspiring work, Gary ministers to the orangutans, local farmers, and his mission of conservation through educational initiatives by making several trips yearly to Indonesia.

Conservation education of people young and old has been the secret ingredient of Dr. Shapiro’s success, whether teaching sign language to semi-wild, ex-captive orangutans or creating scholarships to send young Indonesian men and women to college for biology or forestry studies. For people not involved in conservation education, the book offers a roadmap and lessons for those hardy enough to embark on such an undertaking and for others offers a glimpse of Gary’s perseverance in working tirelessly on behalf of orangutans and other species to preserve their rainforest habitats. Out of the Cage is a gripping, timely story of one man’s determination to save a vanishing species and their ecologically crucial habitats.