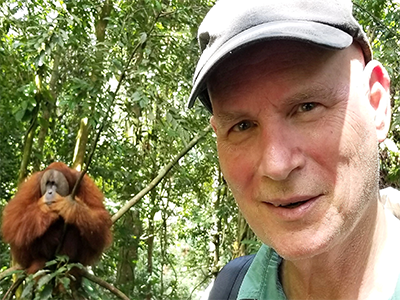 Sharkey the Performing Seal was Doug Sherr’s first best friend. His dad was a big-band leader and Mom was an actress as they toured the South in the last vestiges of vaudeville. As a teenager, he worked in a boatyard where old men yelled at him until he understood how tools worked and was able to fix more than he broke.

In the 1960s, he designed conveyor systems for the Rapid-Standards Company. In 1963, he founded, with a partner, Orion Industries Ltd., a company specializing in the research and application of solid film lubricants. In 1967, he completed a critical sub-contract to NASA for the world’s largest ultra-high vacuum test chamber at the John Glenn Space Power Center in Ohio. That contract was fulfilled by drug-dependant hippies in the basement of an old mansion.

At this point, he realized that he was living the wrong life and sought out what seemed to be the opposite environment. He shipped out as a deck hand in the Merchant Marine on a Great Lakes ore carrier, the Richard V. Lindabury. In 1968, he attended the Design Conference in Aspen, Colorado and was so impressed by the films and the filmmakers presented there that he decided to learn how to make movie magic. His life was now divided into two parts: he delivered a sailboat down the rivers from Chicago to New Orleans and soon got the chance to work on a full-length feature film. Subsequently, he worked on fourteen feature films, numerous TV commercials, and a number of industrial and documentary projects.

The sporadic nature of the film business allowed him to continue working on boats. Over the years, he has sailed the world’s oceans as a deckhand, mate and captain, including being the master of a tall-ship, the Barquentine Osprey, out of Hong Kong. His first visit to Aspen created a great love for the mountains and opened up the third aspect of his life. He followed the traditional path of a ski bum by being a carpenter-to-the-rich during the summer and skiing every day when the snows came. As a result, he wound up being a ski instructor for the Aspen Ski School. For two years he lived in a tipi at ten thousand feet on the back of Aspen Mountain. After a life of controlled hedonism, he retired to a small town in Arizona to pound away on a word processor.